Behind the Screen Campaign Sessions (part-1) 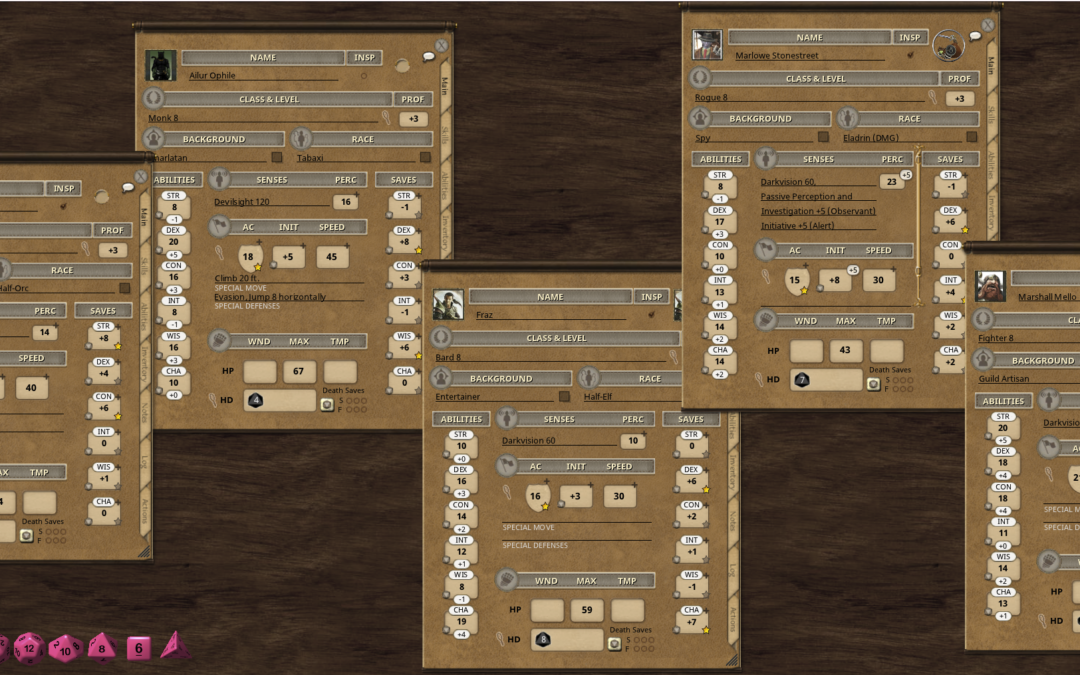 Greetings everyone and welcome to Behind the Screen blog post. Let me introduce myself. My name is Fletcher Haug and I’m a co-founder of The Eldritch Press. I’ve been seated in the DM’s chair for a long time. I started as a DM during 1st edition and seldom got to run a character back then. When I did, I was the youngster in the room and remember mapping endless dungeons and hearing lots of dice rolls coming from behind the GIANT DMs screen. These days I get to be a player once a week and enjoy running a character in between running my own campaigns.

After years of considering the idea of blogging about my games, I decided to finally do it. I’m not planning on making this blog too polished or buffed; it will be a “from my head to my fingers” kind of thing that talks about how I prepare for a game and how it plays out during a session. I hope to illustrate the ways I anticipate and react to the flow of a game session, and the dynamics I consider. This is not an exact science and I can only prepare for the anticipated journey. After a session I will detail what actually happened and how I might alter my thinking in response to the players actions. I hope it will be interesting enough to keep your attention and hopefully will give you insights into how to run or play in your own campaign.

This blog starts in the middle of a campaign that began in Waterdeep with the Dragon’s Heist adventure. It played through the first 3 levels of The Ruins of Undermountain adventure, then morphed into a homebrew campaign. The players are now 7th level and it has taken about one year of playing in 3-4 hour game sessions, three times a month to get to this level. The players own a tavern in North Ward, called the Trollskull, and it serves as their base of operations.

The homebrew campaign started with a major religious event taking place in Waterdeep. A blood red full moon was eclipsed unexpectedly and ominous portents were felt by all religions in the city. The ancient religious reliquary below the Plinth– a popular multi-denominational shrine–radiated strange and powerful signals. Investigations discovered a celestial being held by magical chains and nothing could free this being from its bondage. The chains were connected to three sacred artifacts, holy to all religions, which were sequestered in the reliquary. These relics are known as Mother Source Fragments. They originated from the magic-confining vessel that once held scrolls of ancient deific knowledge, including The Nether Scrolls, the original source of all the known magic in the Realms.

Religious turmoil now grips the city as devout fervor sweeps through the population. The visions of church leaders indicate that deities walk the land in mortal form by choice. Rumors abound that these deities are here to rearrange the power structure of the pantheon, to once and for all settle the primordial feuds between Selune and Shar, and Tymora and Beshaba. The group of heroes have been enlisted by covert government contacts and tasked to prevent the city from tearing itself apart. Little is known, but it appears that dieties are reaching out to persuade religious leaders to locate the lost Mother Source Fragments. If found, these fragments could tip the balance of power to one side or the other.

This is a 5e campaign which is run remotely through Fantasy Grounds VTT and Discord. The players come from a wide background. Two players were introduced to D&D with 5th edition and both of them are new DMs as well. They bring with them a perspective uncluttered by “edition blur”. The other three players have been DnDers since 1st or 2nd edition and bring an understanding of the nuances of how the game has worked over the years. The players represent an excellent blend of varied thinkers. These players were strangers to one another before this campaign statered, and that is good, because they don’t bring with them the baggage that years of gaming together often can. This requires me to make sure I provide proper details and explanations to every situation. There is no shared history for the players to draw from as I present the storyline of the campaign.

Will you find value in my musings? Will you gain insights that you can use in your games? I think you will. Over the years I’ve learned how to identify the parts of my ideas that need to be detailed before a game and those parts that are better left to the chaos of player agency. I have frequently over-prepared for games and too often underprepared, but my divinations of player actions have become pretty accurate. Even if a session goes off the rails, it’s likely I’ve at least contemplated the possibility. This too is game preparation. As you will see, I am still blindsided by unforeseen player actions, but these situations don’t give me anxiety any longer. Instead, I embrace them as they are often the most memorable parts of a campaign. I’m excited to share my experiences with you and hope you enjoy my ramblings from Behind the Screen.

Thank You for Subscribing!